The Oxford Articles - A Call of Cthulhu adventure.

As per a previous post I signed up to take part in the Storytelling Collective's RPG adventure writing workshop during July, this time opting to write for Call of Cthulhu after previously writing a DMsGuild module - Unsettled Ground.

I wanted to capture some of the thinking that went into The Oxford Articles and how it might lead in to other things I have planned.

Firstly though, what is the adventure? 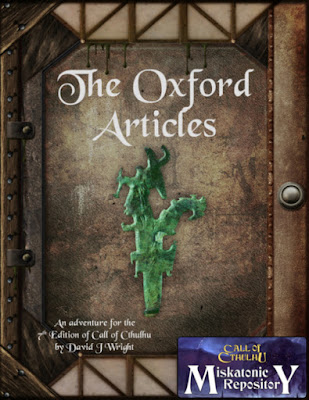 What connects a fire at St Michael At The North Gate Church,
a series of missing books and The Order of the Green Gate?
Visit Oxford, England in 1953 and help uncover the truth.

As I said in that previous post, until very recently, like a few days before the workshop started, I have never owned any edition of Call of Cthulhu nor have I ever played or ran Call of Cthulhu.

That said, I had the Starter Set on PDF and the Keeper's Rulebook (and PDF thanks to Bits & Mortar) to work from. Plus I understood the environment that the game operates within and also had a handle on the basic mechanics of the game before jumping into the workshop.

But of course the first hurdle in anything like this is - "What are you going to write?"

So I already had an idea that I'd started to draft but I didn't want to use that for the workshop. Instead I wanted to write something completely different and something that challenged me.

The only thing I kept from the other idea was the name of a secret society, namely "The Order of the Green Gate". I fully intend to publish that other adventure in due course, November hopefully, so I won't give too much away but this specific secret society and the history of its members is something I plans to write about in general, potentially up to ten different adventures. But we're getting sidetracked...

The workshop asked participants to brainstorm different ideas for what to write. From that list the idea is that you choose one then start to work on it, with the others either being ones you'll revisit in the future or exiled to the writer's bin.

One of those ideas a strong theme started to come through; books, and more specifically university libraries. I didn't want to write something in 'standard' Cthulhu country and so I started to narrow it down to UK based universities that would have old books. That's quite a long list so I picked three universities and then started to look at real world connections to the unusual or perhaps events that could be leaned towards the unusual in a work of fiction.

Two seemingly unconnected things suddenly became connected.
So I began to create those connections and weave a series of events that would result in someone requesting aid from 'investigators'.
It's worth noting that I wasn't born in 1953 nor have I ever been to Oxford never mind the University. So this presented several challenges on a research front.

The workshop suggests that you aim for 3,500 words for the adventure and the recommendation is that you write a one shot.

Going into it after the experience of writing Unsettled Ground, I was wary of falling into the trap I did last time. Namely, I wanted to ensure that what I was writing didn't grow out of control and become largely impossible to complete in the time frame of the workshop.

It's safe to say that I failed at that!

Around the 20th of July I realised that I wasn't going to finish the adventure within the month, I also knew that my plan was to playtest the adventure on the 28th July... Which was almost identical to what happened with Unsettled Ground. So using that learning I set about constraining the scope of the adventure, using techniques and outputs from the workshop to help me do that but also just simply binning content that whilst added more flavour also added about 1,500 - 2,5000 words and time I no longer had...

One of those items that landed on the cutting room floor was a fictional expansion of the tunnel network underneath Oxford. Something I might revisit in the future.

It was during this cutting exercise that my 'draft' was done. It wasn't actually a complete draft though but it was enough material for me to run it and for friends to 'tear it apart in a nice way'.

The 'draft' even with chunks removed was easily a two-session if not three-session adventure, ultimately depending on how deep into the investigation the players go.

The playtest was invaluable both as a Keeper and from the excellent feedback I got from those who played. Adding that together with the 'tear apart' feedback gave me a good solid steer on what needed to change to improve the adventure and ultimately finish it.

Oh, and I forgot to say that during the month of July my laptop died. Fortunately everything was stored in the cloud so no data was lost but I was largely without tech for a week.

Ultimately though, The Oxford Articles was published on the 3am BST on the 5th August and has since gone Copper (51+ sales) and seems to be quite popular too!

I have to add, the RPG Writer Workshop and Miskatonic Repository communities are amazingly helpful and encouraging. They really are communities that celebrate each others success. So if you get the chance to be part of either or both communities, go for it. You won't regret it.

Posted by David Wright at 17:51 No comments:

Email ThisBlogThis!Share to TwitterShare to FacebookShare to Pinterest
Tags: Call Of Cthulhu, comfort zone, community, DriveThruRPG, my hobby, something different, something new, up and running, winning

Last year AlbaCon raised over £3,100 for a Scottish charity, specifically for It's Good 2 Give who provide amazing support to young cancer patients and their families.
Ahead of last year's event we had no idea whether people would come or indeed if people would pay to play RPGs.
Thankfully they did on both counts.
AlbaCon 2021 is raising money for another Scottish charity, this time it's Penumbra.
Penumbra are a mental health charity and in many respects it's almost the perfect match to an online RPG convention, particularly given the last 18 months where many of us have moved our games online or indeed returned to the RPG hobby to escape from the pandemic.

Every penny that we raise from events, donations and via our D&D Beyond Raffle will go to Penumbra.
We have a lot of companies and individuals supporting us by Sponsoring the convention this year and they're all fantastic humans for doing this.
Our attendees are in for some amazing offers and giveaways throughout the convention weekend.
So if you've got some free time over the weekend of the 2nd & 3rd October, please sign up for events.
If you can't make it then please donate.
If you're a D&D fan, then also consider entering our D&D Beyond raffle. We have some amazing prizes to give away.
Posted by David Wright at 16:24 No comments:

After doing the RPG Writer Workshop in November 2020 and producing Unsettled Ground on DMsGuild, I came into 2021 with grand plans to produce more.

Those plans haven't turned into outputs and it's in part down to the usual "spinning too many plates" but it's probably as much due to a lack of focus on creating those outputs.

I've got 2 other DMsGuild scenarios and 1 Cthulhu-esque scenario drafted but not in the sense that they're ready for proof reading & editing. Significantly rougher than that.

So, to help tackle this and hopefully assert some structure I've signed up for the RPG Writer Workshop for Summer (July) 2021.

This time though I'm writing something for Call of Cthulhu.
Why?
Those who know me may be quick to point out a few things.
So why am I doing it with Call of Cthulhu?
I had / have plans to publish a series of GUMSHOE powered adventures but due to licensing have to use either Fear Itself or Esoterrorists for it.  Now in all honesty that probably isn't that much of a negative but the adventures definitely have more of a Cthulhu-esque leaning than anything else.  I own Trail of Cthulhu and enjoyed running it but I'm not beholden to it as a system.
So, by doing this using Call of Cthulhu I hope it gives me the skills and techniques for writing that "type" of adventure and then I can either pivot back to GUMSHOE or stick with CoC for what I have planned.
CoC isn't a mechanically complex game, in fact it's quite the opposite. I've just never been a fan (as a GM) of percentile systems.  Maybe this experience will change that? Who knows.
So yeah, I'm writing a Call of Cthulhu adventure during July. I have several ideas of what it could be without using the draft one I mentioned above.
If you're thinking about writing for the Call of Cthulhu Miskatonic Repository then I highly recommend reading the following websites -
Once you've gone through all of those then worth checking out the following -
Free Art Packs
Free Maps
Product Templates
All of the links above will help you to publish a finished product.
All you need to do is write it.
Which is what I intend to do by July 31st!
Posted by David Wright at 10:19 No comments: